Wahoo is relatively new in the world of bicycle trainers. A justified question is therefore: why choose a Wahoo bike computer? Especially active Smartphone users choose Wahoo. The operation is in conjunction with the operation of your Smartphone. The pairing functions have an important role in the functioning of your Wahoo bike computer. Most users are relatively young and choose Wahoo rather than the more traditional brands. They also often follow the example of many young professionals. In the peloton there are a lot of well-known names that want to be associated with Wahoo. 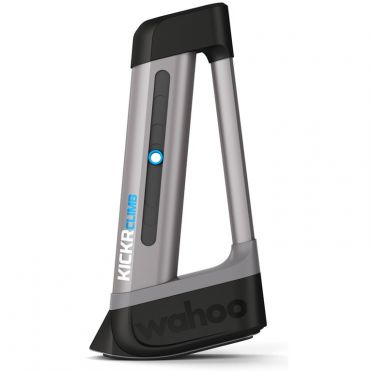 Take your indoor training up a notch with the Wahoo KICKR CLIMB Indoor Grade Simulator. The CLIMB adds physical grade changes to match the virtual terrain and resistance of your ride; you will get the most immersive and realistic experience possible and it will further enable you to work on your climbing muscles and pedalling technique. This unit will physically adjust your bikes position to match the gradients of your workout or can be manually adjusted via the included remote that attaches to your handlebars or slots into the top of the CLIMB when not in use. Unlock and lock climbing modes allow the CLIMB to react to gradient changes from external sources such as Zwift, or solely to remote control commands.

The Wahoo KICKR SNAP makes indoor training a "snap!". It's a convenient, easy to set-up wheel-on smart trainer with the realistic ride experience Wahoo smart trainers are known for. The SNAP's legendary flywheel features technology that creates the same resistance experienced when riding outdoors. Plus, no other indoor bike trainer has more software training options, including Zwift and Trainer Road. The KICKR SNAP includes LED lights for connection status, third party power meter support, and the power measurement is now accurate up to +/-3%.